When it comes to married couples I, honestly, care about only two stories.  The proposal story and the breakup story.  Not that I want couples to break up, but if they do I find the story fascinating.

Mark and I have break up stories, but not any since we’ve been married.  Which is probably more aptly called the divorce story.  Either way, we don’t have one.  However, we have one proposal story.  A proposal story that happened exactly one year ago today.  (Other cool things that happened on this day are Shelly’s birth, Lincoln’s assasination, and the Titanic striking an iceberg.)

I wanted to share our proposal story today.  How he completely surprised me by writing a song for me and singing to me in the Opryland Hotel gardens.  How he made that day absolutely perfect for me even though I was terrified that I wouldn’t have a proposal story because our wedding was little more than a month away and who bothers with fancy proposals when the entire wedding is planned, right?  How he bothered because I nagged him daily he knew how important it was to me.  How I got to eat pasta.  I love pasta. 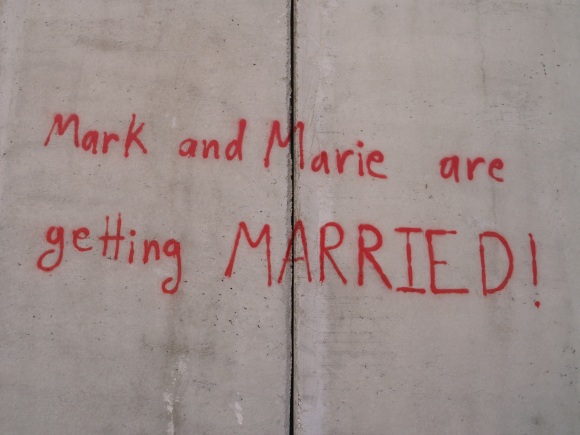 Dude in Palestine doing some graffiti for me.

I ordered these pictures from a group that writes things on the barrier wall and your money is used for social and cultural groups in Palestine.  I don’t remember how I found their website, but I thought the picture would make cool Save the Date cards.  They didn’t.  So I thought I’d use them here to help tell our proposal story.

But first I had to find the pictures in my email.  Which meant I searched my email for the terms “Mark and Marie Getting Married”.  Where I stumble upon an email exchange between Mark and I about whether or not we’re ready to get married.  From March 2007.  We agree we aren’t ready, and I’m mad at him.  For agreeing.  Yeah.  I’m not real sure either.

And now I’m reading these emails and I’m getting re-mad.  Re-mad over emails from 2007 about whether he wants to marry me or not.

Right now, I want so bad to call him.  And yell at him.  I want to be all “Why don’t you want to marry me?”  But I’m pretty sure he is going to be all “rational” and “sane” and say something like, “Marie, we are married.”

Anyways, happy Engage-aversary to us.  And happy birthday to Shelly.  And I’m sorry your dead, Mr. Lincoln.

Anyone want to share their proposal story?  Or the story of the time they got stupid mad over something that was completely irrelevant because they are crazy?  Please share.