5 Comments
By Marie Funny to me, Marriage

No, YOU ruined our kid…

“You’ve got a little something there…” Mark told me as he pointed to the corner of his mouth.

“Where? Here?” I said as I goofily tried to lick as much of my face as I possibly could.

I thought I was hilarious and laughed uproariously at my silliness.  I looked up at Mark and he had a small smile on his face as he rolled his eyes.  Like he was exasperated or something.  I’m a freakin’ comedic genius, Punk.  Don’t roll your eyes at me.

“You are adorable.  Adorable and weird.”

“Whatever.  When we have a little girl and she’s all licking her face like a dog, you’re not going to roll your eyes.  You’re going to melt.  Because our little girl is going to be just. like. me.”

“That would be fine with me,” Mark said, appearing to be done with the conversation and ready to settle in for another evening of Truth and Holiness brought to us by Fox News.

I don’t know why, but I felt bad saying that she’d be only like me.  Like Mark’s DNA wasn’t important.  And I also was going to do whatever possible to avoid watching one more episode  of the “O’ ReillyFactor”.

“Of course, she would be a little like you,” trying to engage him again.

He raised his eyebrows like he wasn’t “getting it”.  I thought pictures would help.

“You know, she’d be half Care Bear and half Dexter (from Dexter’s Laboratory).”

“Yeah, nerdy and kinda grumpy at the same time.  It suits you.  She’ll be a cool kid.  Trust me.”

However, I’m thinking that would come together looking more like this: 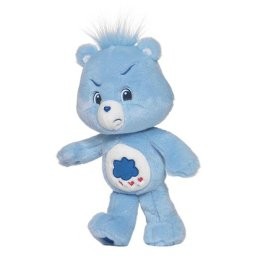 Which really wouldn’t be very cool.  But I’m not telling Mark that his DNA kind of ruined our kid.  If I did, he might force me to listen to Rush.  So not worth it.

What cartoon character do you most resemble?  Your partner?  How would that junk come together?