4 Comments
By Marie Funny to me, Life, Marshmallow

Marshmall-Otis: 8 weeks left and The Response

I was thinking about that this morning and about the fact that when I first broke the news on this blog I was only 8 weeks in, and now I’m 8 weeks from being done.

Being so close has not made me anxious about seeing our little Marshmall-Otis (you like what I did there). If you want my opinion, the little guy can hang out in utero until July for all I care because, just to be real, I’m pretty awesome at this stage of the parenting gig.

However, I did go looking at pictures of Baby Mark and Baby Bobby (my little brother) to try and get an idea of what baby boy genes look like in our family. 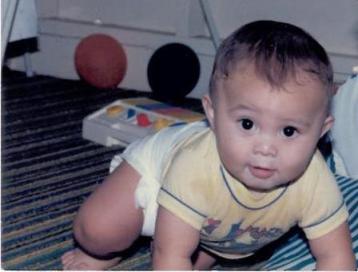 I’ll be honest. Those are cute babies and all, but is it just me or are those heads huge? Wow.

So what you’ve all been waiting for: Otis’ Response

I’m actually not going to post the entire email because a) it’s long and b) I never got explicit permission to do so from Big O, and I figured I’d try and limit my stalker-like weirdness.

However, he seems like the most lovely of men. A deep and independent thinker type of guy which I dig. He took some serious time to answer my email carefully and thoroughly. I mean, it was so lovely, that I’ll probably print it out and put it in Marshmall-Otis’ baby book.

But for the curious, he loves his name and that it’s quirky. He also reminded me that names are cyclical so what’s in fashion or feels normal to me isn’t going to be normal forever (for example, every class I was in growing up had a million Jennifers and I don’t know a single baby named Jennifer). It should also be of note that Tobey Maguire of Spidey-fame named his son Otis. The name is making a comeback. Trust.

However, my favorite part of the email was this:

My whole take on the situation would be that your son’s strength and likelihood of success will not come from his name, but from the tools and confidence that you give him. I’d have a hard time getting behind someone naming their kid something like fart or turd, but you can do much worse to hinder your child’s potential. So many people have a fear of standing out, being different than the ‘norm.’ This often is what prevents people from realizing dreams, from reaching the full potential for success. They don’t know when to follow the leader and when to stand up for themselves and trust their heart.
Well, that’s enough from me. Hopefully you can take something from this, more than just the fact that I like to write. I think Otis Oates is a damn cool name. Chicks will dig it. Please do let me know what you end up deciding. If there is one thing in the entire world that I want to pass onto Marshmall-Otis it’s to not be afraid and to love whoever God created him to be enough that he wakes up every day wanting to share his gifts and uniqueness with the world. That would be considered parenting success in my book.

The best news, though?

4 thoughts on “Marshmall-Otis: 8 weeks left and The Response”