I thought about writing about my dad for Father’s Day since I wrote about my mom on Mother’s Day. I have a thing about being fair and equal and just. Call me the Supreme Court, I suppose.

But I couldn’t find words that fit. He’s my daddy. And I love him. And when I see how he looks at my son my heart melts because I know he used to look at me the same way. 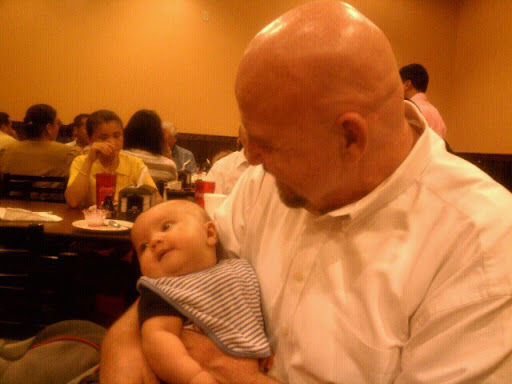 Who am I kidding? He still looks at me that way.

Anyways, one of my favorite posts that I’ve ever written is about my dad. So I’m just going to copy and paste it here. That’s right, I am copying and pasting a daddy day post the day after daddy’s day. My gift giving skillz are on point.

I think the hardest part about growing up for me was losing the belief that my daddy was not superman.

I was the poster child for daddy’s girls.  He was the funniest man I had ever known, and I always wondered why he wasn’t a stand up comic.  He was brilliant and knew everything, or atleast something about everything.  He was kind and comforting, and there was nothing better than ending nearly everyday for 8 years curled up  in his lap.

My daddy was my everything.

And then I found out he was human.  It was honestly more painful than finding out Santa Claus wasn’t real (btw, this particular bit of information left me sobbing, it was like my grandfather died!).

My dad wasn’t funnier than George Carlin, and lots of that knowledge was more opinion (you mean, it isn’t a fact that Democrats are in responsible for all the world’s problems? Blasphemy!).

Despite finding out he is (gasp) human, my daddy taught me so much…

I often looked at those pieces and would wonder, “What would happen if I broke one of these vases or figurines?”  It troubled me to think that these objects could possibly be more precious than I was, but I wouldn’t argue, after all I was free, and they must have spent hundreds of dollars on these knick knacks.I finally gathered the courage to ask, and my dad told me that there would never be an object that I could break that would make him love me less.  People were always more important than things.  Remember that.I have remembered, and it isn’t just about not breaking gaudy vases.  For me, it’s about not letting the desire for things ever become more important than the desire for relationships.   The joy of having things will never replace the joy of being around loving, caring people.  Treasure your people.

I have always struggled with the question of what I wanted to be when I grew up.  A doctor or lawyer for the money?  Or maybe a children’s book illustrator because of my love of doodling? My dad would ask me to consider Jim Henson.

It’s very unlikely anyone would ever say, “I want to be a guy who makes puppets”.  It seems childish, and who would pay you to make puppets, anyways?  And most people probably wouldn’tget paid to make puppets.

Jim Henson seemed to make it happen.  How?

My dad would point out that Jim Henson loved creating the puppets and the characters.  That’s what made him great, he was passionate and loved his job.  Never underestimate the power of actually loving what you do.

My dad would always insist that we follow our hearts, and not the promise of a paycheck.  When you love something you’ll do it well, and somehow you’ll get taken care of.  No worries.

That was where my dad stopped me.

No matter what classroom I was in, I was the only one in control of the education I received.  No one was going to give me anything.  My decision of what kind of student I would be was more important than my decision of what school to go to.

This mindset honestly changed my life.  Deciding to be a learner was more valuable than deciding where to learn.  Deciding to be productive and enthusiastic was more critical to my job satisfaction than where I worked or who I worked for.  Deciding to be loving, kind and compassionate would be more important to my marriage than even deciding who I was going to marry. My experience of life was a decision, it was never something that would simply “happen” to me.

I will probably never consider my dad superman again.  I can easily point out everything that is “wrong” with him.  However, the more I think about what he has given me, and the kind of man he is, I can’t help but admire him.

One thought on “Daddy’s Day”