Me: Yes, you’re so cute they might put you in prison. It’s probably illegal to be this cute, you know.

Me: So we better hide you so they don’t find your cuteness, ok? Let’s hide Otis Bear so that they don’t put you in prison.

At some point in the conversation I got scared. What if I was causing emotional trauma to my baby bear? What if one day he somehow recalls this conversation, but only remembers the threats of prison? What if he spends his early childhood secretly afraid that I’m going to turn him in to The Law for being so ridiculously cute? Was it possible that my innocent conversation with Otis could turn out to be the root of future self-esteem issues or a general anxiety about not feeling safe because his mom was going to put him in prison?

Well, now I’m lying. If Otis really does do something one day that deserves prison his mommy isn’t going to be able to help him!

Me:  Unless, of course, you do something that deserves prison. They don’t put people in prison for being cute, though. So no worries.

Did I just tell him he could get away with things because he’s cute? This conversation was not going as planned, but thankfully it’s pretty easy to get out of awkward conversations with 3 month olds. You just, ya know, change the subject…

Me: Are you farting, Otis Bear? Is that your poopy face?

I’m pretty sure any long term emotional damage was averted. But the worst part? When I checked my blog’s stats on Monday morning someone got here by searching “Otis Oates in prison”.

Crap. My baby is on the run. And just to be real, if you could go to prison for cuteness, he’d totally be looking at a life sentence. 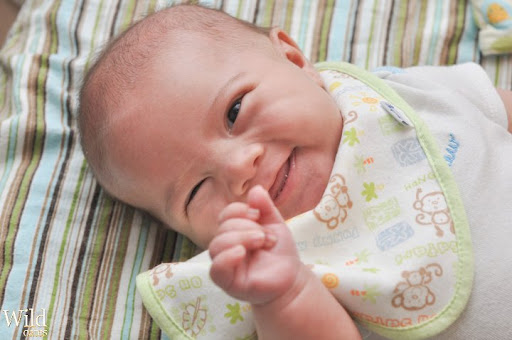 One thought on “Otis goes to prison”