My husband is a baby naming genius

When Mark said he wanted to name his child Otis I thought he was, well, joking. Otis is a name for bullfrogs and little old men. Not babies.

I even remember the first time Mark seriously suggested the name.

We were going up the escalator on the way to get the ultrasound to find out whether we were having a boy or a girl. As we stepped off the escalator Mark said, “Oh, look. There’s his name”. I looked around and asked what he was talking about. Mark pointed down to the ground, “Otis. It’s his name if he’s a boy.”

I won’t lie to you right now. I said a silent prayer that we were having a girl because I hated to break the news to Mark that Otis would be a bad name. No one named their kid Otis (except for that old dude’s parents, obvs).  And I am not in the business of being a trendsetter.

Immediately after praying we were having a girl I worried that if we were having a boy he would feel unloved. So I took it back. I wanted whoever was inside me. Let’s just be real clear on that.

Well, you know the end of this story and that we were in fact about to be the parents of this little boy. Let’s put a picture up just in case you forgot about who I am talking about…

We walked out of the ultrasound office and were on cloud 9. We were going to have and son and life was wonderful and the happy hormones were in full effect and I agreed. Yes, Otis was the perfect name. Now go take a picture of the escalator.

(Note of warning: Taking pictures in a medical center is a no-no. A lady came running at us to stop because photographs were a potential violation of patient privacy. I told her we were just excited because we were having a boy and his name was on the escalator. She understood.)

The next sign was Otis James. You can read more about that here.

After I blogged about Otis James Julie Kroenig did a story on him after hearing about Otis the Tie Guy 3 times (one of those times being on this blog!). Here’s the video for that interview. Amazing, right?The month that Otis was born do you know what the Dolly Parton imagination library book was?

Otis by Loren Long. The story of a tractor who is friends with a cow.  Adorable.

Spiderman’s Tobey Maguire even jumped on the Otis bandwagon by naming his son Otis Tobias Maguire.

And today I found out about the coolest sign of all time (thank you, Tabitha!).

Jay-Z, one of my favorite celebrities, has a new song out with Kanye and do you know what it’s called?

So any worries I had about Otis not being cool or accepted went flying out the window. Because just like Jay-Z can make a Yankee hat more famous than a Yankee can he will be instrumental in reclaiming the awesomeness that is the name Otis. 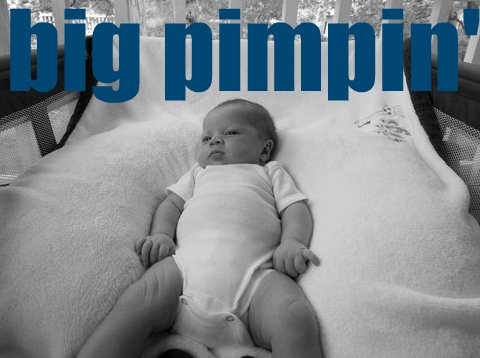 One thought on “My husband is a baby naming genius”