I don’t really need to write about this. I could just send you over to Becca George’s blog and say “Me, too”. Except she paid $12 for parking and I paid $15. Maybe she had a coupon…

But that wouldn’t be very blogger of me, right? To just link you to someone else and call it a day? Bloggers write down everything. Every moment between every milestone.

That, my friends, is what we call a segue.

Hallmark is on a tour. The Moments Between the Milestones Tour.

And they made a stop in Nashville. And they invited me. And Becca George (who I didn’t read before the event, but now love (she makes pregnancy look so adorable), and was so glad to read that she was essentially a newbie to the blogging inner circle, too). And, like, 12 other Nashville bloggers.

Hallmark is promoting the idea of making the in-between moments (like dancing with your baby while your hubby sings hymns) just as special as the big moments (like, you  know, Valentine’s Day). And who better to spread this idea than bloggers?

So we met at 417 Union for breakfast and everyone from the Hallmark staff to the other bloggers were super friendly. I mean, I walked up to the table for my name tag and Jon handed me my name tag. Before I even told him my name.

Jon: We have our ways (in a nice way, not a Creepy McCreeperson way)

I haven’t been on tons of first dates, but this was already going better than 3 that I can think of off the top of my head.

I sit down at a table by myself. Normally, I’d freak out about this and become ultra paranoid that everyone hates me (I have a potential false memory that I’ll probably share one day) but I was fine. And hungry. So I sat and ate my bacon as the 6 other bloggers that were already there chatted.

I’ve never been to BlogHer, but I’ve read other people’s experiences and some people talk about being shy and not knowing anyone and people have cliques and they spend the entire time crying in bathrooms. Because let’s be real, we blog for a reason. People scare us.

Anyways, I was maybe, a little bit, kind of bracing myself for that. For not knowing anyone and being excluded. Except within minutes the table in front me asked if I wanted to sit with them. Of course, I said yes to the lovely ladies (Malia, Scarlet, and Busy Mom, I mean, Elizabeth). Because I had been eating bacon I knew that these ladies had real blogs. Like, I highly doubt any of them wrote about saving poopy diapers.

The event consisted of meeting some really neat people at Hallmark who did things like write the words in cards (they’re not elves) and took pictures for the cards (also not an elf). And they did some really neat things for us, like, this video:

And if you take the time to watch it just know that I was weepy the whole time because there is nothing better in the world than the montage scene in a movie. You know what I’m talking about. Where you watch the little kids grow up or the relationship progress or the football team finally realize that their teammates aren’t complete racist jerks. 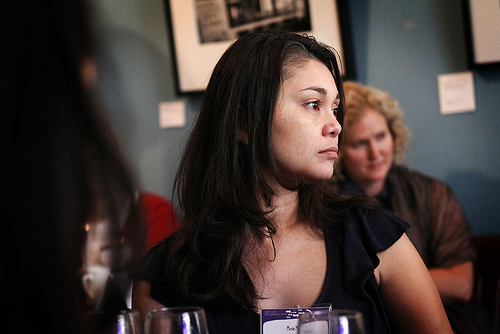 But that weepiness could have also been the pink eye I had but didn’t know I had. Until Tuesday. I had pink eye for almost a week and didn’t know it. I am such a beast. A weepy beast.

(And, Mom, yes there are more pictures from the event. Go here.)

We did some neat writing activities with the Hallmark card writers (Tom and Linda) and talked photography with the photographer (Kevin). And then they sent us home with all sorts of neat goodies. Like these huge shopping bags of goodies and when we walked downstairs to where the regular restaurant was I heard a lady ask the host of 417 Union if there was a store upstairs and could she go.

The best part was the reminder to keep blogging. And not because I want to make a million dollars or be the next Dooce, but because I love that I can read my blog in 10 years and remember the funny stories that happened on the regular days before Mark and I’s first anniversary. I can read about all the important but still mundane things going on when I was pregnant. And now I’m writing the story of how Mark, Otis and I are becoming a family. There is so much life happening and I’m just so thankful that I’m capturing it in my way.

The other best part? I didn’t get towed.

Life is awesome. Thank you, Hallmark, for reminding me.

4 thoughts on “$15 parking and the #Hallmarktour”