3 Comments
By Marie Funny to me, Marriage, Mommyhood

The Creepiness of Cosleeping

Otis is still in our bed. And we still kind of love it. Because without cosleeping/bedsharing we wouldn’t get to wake up to this awesomeness… 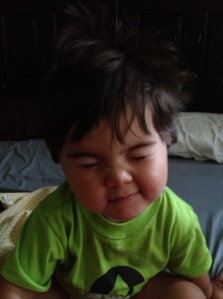 Seriously, his face is pure joy to wake up to each morning. And if you know Mark you’re probably surprised to hear that he loves Otis in our bed just as much as me (crazy attracts crazy, I guess). Every time I talk about when we should at least move him into his bed (that’s in our room), we both hesitate and then Mark will mention that he’d miss waking up to immediate kisses and smiles and we decide to wait until next month.

All that said, we have had a spell of funny-to-me bedsharing moments that I have decided to blogshare with you!

Night Terrors
No, I don’t think it’s funny that Otis may have had a few night terrors in the recent past. But I do think it’s funny that when he’s in the middle of one he won’t let Mark come near him. And Otis will yell, “No, no, no!” in Mark’s direction. I’ll try to take him out of the bed to rock him, but he won’t want to leave the bed and we started to get the distinct impression that Otis wanted Mark to leave the bed. This makes me think that Otis’s nightmares might include Mark, and he might be waking up pissed off at Mark which, um, I totally get.

The best part was that I thought it was a great time to give Otis a lecture about true ownership. “Otis, you cannot kick daddy out of bed. This bed is daddy’s and he lets you sleep here. You don’t let him. Understand?” No, Marie, he doesn’t.

Creepy Baby Talk
Last night the boys went to bed a couple of hours before I did. So when I got to bed it was completely dark and both of them were fast asleep. As I laid down I leaned over to give Otis a kiss when I heard a very awake, very chipper toddler say, “Hi!”

Almost had a heart attack. And if I had even an ounce of survival instinct Otis would have been accidental lunch meat (stand my ground indeed!)

Because be for real, is there anything creepier than baby voices in the dark when you aren’t expecting it? I don’t think so. In the mood for more creepy kids? Check this out. Chills.

Creepier Baby Talk
I need to preface this one. Otis only knows a handful of words right now (we’re working on it!). One of his newer words is please. But it has an Otis spin on it. He pronounces ‘please’ as ‘plee-ya-ya’ while nodding his head yes. Basically, he is practicing his Mr. Subliminal impression and will say please while “asking” for something while also saying/nodding yes in case you don’t know the correct answer to his “request”.

So one of the obvious downsides to bedsharing is the creativity required for Hint, Hint. Which, whatever, that doesn’t happen after kids (JUST KIDDING!). Well, Mark thought that both of us being up before Otis one morning would be a perfect time to squeeze some time together in. But he was very wrong because I need Otis no where near us for anything resembling Hint, Hint to happen and Otis’s foot was touching Mark’s leg and, well, no. Just no.

And Mark comes back with, “Plee-ya-ya-ya” while nodding his head ‘yes’.

I lost it. We had just used our son’s baby talk to negotiate Hint, Hint.

We’ll be moving him into his own bed tomorrow (not), and starting really intense therapy (probably).

3 thoughts on “The Creepiness of Cosleeping”