Thanksgiving 2013
Otis fell in love with his nth cousins, Jayden & Delaynee. I don’t know what “level” cousins they are (second? third?), but after this kiss I’m thinking that we’ll keep Tennessee’s cousin marrying laws a secret from him for a while.

The Oates Thanksgiving felt small compared to last year’s (both of my MIL’s sisters AND their families made it down for a surprise visit last year), but we still crowded up the kitchen with some fudge taste testing. These ladies are lovely AND laughed at all my white people jokes, so they are pretty awesome in my book. 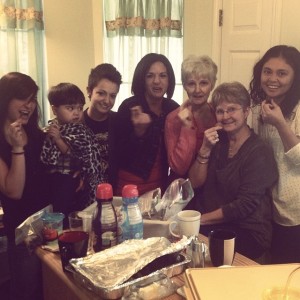 After the Oates it was off to the McKinney’s Thanksgiving which actually looked more like Christmas because my mom just can’t contain her love of Jesus and Christmas decorations.

My favorite picture from the night was this one because it just says so much. First, that my siblings are some of my favorite people. Second, I’m always the third wheel. Third, my brother would have made an amazing sorority girl.

Christmas 2013
This has probably been the best Christmas ever, the year that I got the Barbie dream house included.

We watched Christmas movies every night, and decorated promptly after finishing up Thanksgiving leftovers.

Otis is in love with Santa. In. Love. And I’ve never been big on drugs, but if they sold the feeling of seeing your kid light up at the personification of Christmas magic I would be the biggest addict ever. 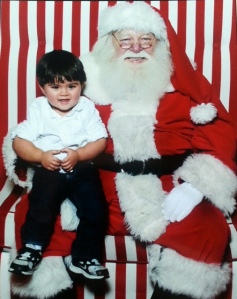 He got the antlers (below) from Santa, and basically acted like he’d been crowned the King of England and wouldn’t take them off. Give me another hit. Or drag. Or snort. Or whatever drug verb is appropriate.

At the Filipino Christmas Eve party, my mom was holding the newest addition to the family, Nolan. This baby is another form of crack. He is so peaceful and chill. Obviously, my mom is giving me a subtle hint that she could totally handle another one. Me too, Mom. Me too.

Speaking of Filipino Christmas Eve, Dirty Santa is no joke with these people. Ok, it is kind of a joke. Everyone brings stuff for the kitchen (crock pots, tupperware, blankets) so men have slowly stopped participating for anything other than being their wife’s second chance to get what she wants.

We got a tupperware set that I stole from my mom. It was a cold move, but it had to be done. Our tupperware was junk.

Christmas morning was a let down. Otis was pretty overwhelmed by Santa gifts which led to a meltdown. Then I took a pregnancy test because I’d felt funny all week, and maybe? But mostly maybe not. Surprisingly, it was Mark that was sad, and I was relieved. But still, how perfect would it have been to let all the grandparents know on Christmas morning about their 9-months late gift?

I even had the perfect Facebook announcement:
My New Year’s Resolution is to gain 50 pounds and lose 8 in August (or whatever month the not real baby would have been born).

So I was a tiny bit disappointed, but mostly relieved because I had just settled in my mind that a 4 year gap would be nice between Otis and a sibling, and this would be a just a tad ahead of schedule. And getting anywhere early just wouldn’t be my style, would it?

The grandparents hit it out of the park with presents, though. My parents made sure he owned every John Deere toy in Middle Tennessee and Mark’s made Otis the mayor of his own little city.

I’m kinda sad that the Christmas season is over, but mostly inspired to make next Christmas even better. If that’s even possible.

One thought on “Holiday Recap”